Abstract
Thrombosis of the left renal vein (LRV) is a rare occurrence usually associated with hypercoagulable disorders. It may also be caused by extrinsic compression due to anatomical variations. Such variations, known as nutcracker phenomenon (NP), are usually completely asymptomatic, and they have been described in three variants: a narrowed aortomesenteric angle (AMA) with entrapment of the LRV; a second, rarer variant with an anomalous retro aortic LRV compressed between the abdominal aorta (AA) and the spine (posterior nutcracker syndrome, PNCS); and a third variant with a duplicated LRV with a pre- and retroaortic course, compressed both anteriorly and posteriorly. The development of symptoms secondary to NP is mainly due to renal congestion, often difficult to identify, and includes flank pain, ipsilateral varicocele, hematuria, and orthostatic proteinuria, among others. The most severe complication of NCS is LRV thrombosis with or without associated predisposing prothrombotic factors. The present case associates a PNCS to LRV thrombosis with a floating thrombus in the inferior vena cava and pulmonary embolism.

INTRODUCTION
Posterior nutcracker syndrome (PNCS) is the entrapment of an anomalous retroaortic left renal vein (LRV) between the aorta and vertebral column. Although rare, it may present with several congestion-related symptoms and may cause serious complications, including secondary LRV thrombosis and pulmonary embolism (PE). Usually, conservative management should be prioritized, but surgical endovascular intervention is warranted in particular cases. Herein we present what we believe is the first case of an LRV thrombosis secondary to PNCS with clot extension into the inferior vena cava (IVC) and secondary PE.

CASE PRESENTATION
A 31-year-old male was admitted with 2 days of increasing left-sided flank pain that worsened in the last 12 hours prior to emergency department consult. His past medical history was remarkable for recurrent episodes of presumptive pyelonephritis that had been previously treated with broad-spectrum antibiotics (ciproxin, ertapenem), with negative urine cultures. His vital signs upon admission were blood pressure 140/70 mm Hg, heart rate 76 beats per minute, temperature 97.5Â° F (36.4Â°C), and oxygen saturation 96%. A computed tomography (CT) intravenous pyelogram showed a slight delay of the pyelographic phase of the left kidney and a thrombus occluding the retroaortic LRV and extending to the IVC (Figures 1, 2). This was immediately followed by a thoracic contrasted CT scan, which was positive for right lower lobe subsegmental PE. Moreover, testicular ultrasound revealed the presence of a large left varicocele. Laboratory tests for thrombophillic disorders and tumor markers were within normal ranges, with the exception of a D-dimer level of 3454 ng/mL. 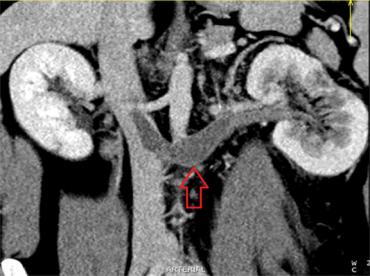 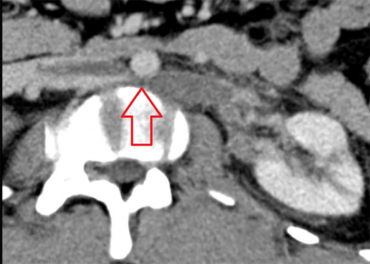 
Subcutaneous low-molecular-weight heparin (LMWH; enoxaparin) was started at 1 mg/kg every 12 hours. A retrievable IVC filter was placed via right internal jugular access in a suprarenal position due to the intracaval extension of the LRV thrombus and the presence of pulmonary emboli. The patientâ€™s hospital course was satisfactory; his pain subsided gradually while he maintained stable renal function (creatinine 0.74 mg/dL). The patient was discharged on the fourth postoperative day with anticoagulant therapy (subcutaneous enoxaparin at 1 mg/kg every 12 hours) and irbersartan (75 mg PO daily). Several days later, the LMWH was changed to rivaroxaban (20 mg/day). Subsequent outpatient renal scintigraphy revealed symmetric and adequate renal function. A follow-up CT angiogram performed 6 weeks post discharge showed resolution of the IVC thrombus with patent IVC filter but persisting LRV occlusion (Figure 3). The findings allowed for transjugular IVC filter retrieval without complications. The patient was prescribed direct oral anticoagulation to continue for 6 months. 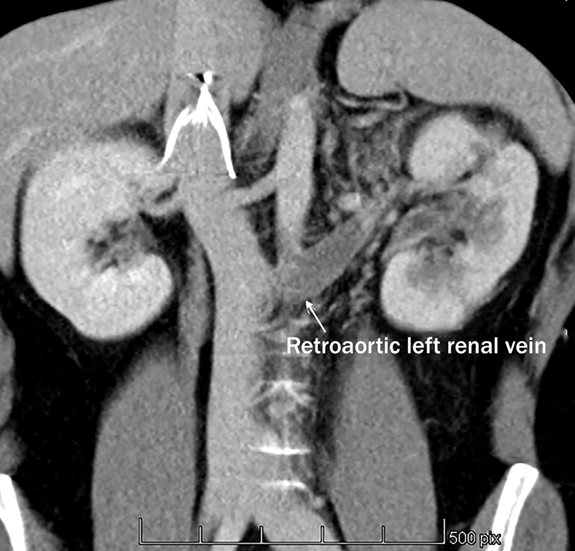 
DISCUSSION
The asymptomatic finding of an external compression of the LRV is known as a nutcracker phenomenon. Although challenging to properly define, this phenomenon refers to LRV compression, most commonly between the aorta and the superior mesenteric artery (SMA), with impaired blood outflow often accompanied by distention of the distal portion of the vein. Due to the narrowed aortomesenteric angle with entrapment of the LRV, a pressure gradient may develop between the LRV and IVC, resulting in a diameter differential between the distal (distended) and the proximal (narrow) portion of the LRV.1 These findings are nevertheless unreliable due to the anatomical variability of the aortomesenteric angle, differences in body mass index, the effect of the course of the inferior duodenum, and the development of efficient collaterals relieving the venous congestion. Additionally, many of these anatomic findings are common in healthy individuals.1

Progression to symptomatic nutcracker syndrome (NCS) is consequently identified by the development of different degrees of renal venous congestive symptoms. These may include kidney-related flank pain, left varicocele, pelvic congestion, unilateral hematuria with or without resulting anemia, and orthostatic proteinuria, among others. These symptoms are often vague and can be misinterpreted clinically. The NCS may also present with simultaneous compression of the duodenum and a consequent concomitant SMA (Wilkie) syndrome.1 The most severe complication of NCS is LRV thrombosis with or without associated predisposing prothrombotic factors.1,2

Three variants of NCS have been described in the literature. The most frequent form is compression of the LRV by the SMA against the abdominal aorta; this is known as anterior NCS.4-6 A second and rarer variant is the presence of an anomalous retroaortic LRV compressed between the abdominal aorta and the spine, termed posterior NCS (PNCS). PNCS has only limited literature reports in the past decade.2,7 Park et al. published a systematic review finding 27 cases of PNCS.8 Other, much rarer forms of NCS with entrapment of the LRV between an anomalously emerging right renal artery and the SMA have also been reported.9 Lastly, isolated case reports have described the presence of a duplicated LRV with a pre- and retroaortic course that compresses both anteriorly and posteriorly.2

However, we have not found reports of NCS with associated LRV thrombosis or PE similar to the findings in our patient. Therefore, there is no established recommendation for the placement of IVC filters for these cases. Conservative treatment with anticoagulants should be the primary approach to LRV thrombosis, even if associated with an NCS. Endovascular procedures, such as the placement of a prophylactic IVC filter, need to be considered individually and are best reserved for patients with recurrent pulmonary embolism.10 Given the evidence of PE in the presence of free-floating caval thrombus, we decided to place an IVC filter as a prophylactic measure to prevent recurrent embolism.

CONCLUSION
Although most thrombotic events involving the renal vein are secondary to nonmechanical medical conditions,3 NCS with symptomatic extrinsic compression of the LRV caused by surrounding anatomical structures may, alone or with other predisposing factors, be a rare cause of LRV thrombosis. We believe this is the first report of an LRV thrombosis secondary to rare PNCS, associated with concomitant PE in the absence of any other predisposing risk factors. Medical therapy with anticoagulation successfully preserved renal function, and a retrievable IVC filter possibly prevented further PE from the floating caval component of the thrombus.